I had a chance to test two new LG TVs from 2017 LED LCD range – 43-inch UJ6517 and 49-inch 49UJ7507. Both TVs are based on LG Displays UHD IPS panel with LED backlight, have support for HDR and run latest webOS 3.5 platform. Few weeks long test has helped me to check how well do they perform in various aspects, but primarily in terms of picture quality. Read on to find out more.

Summary : Similar to previously tested Samsung's MU6400 series, the main improvement I saw in UJ65 and UJ75 series TVs is in the upgraded webOS 3.5. The platform gets better and better every year and is very easy to use, perfectly stable and a real pleasure to be used in combination with Magic remote control supplied with the UJ75 series. Same as before, IPS panel is still the biggest limiting element of LG's LCD TVs, having low contrast which is not capable of delivering truly dynamic imagery, not even in SDR, let alone in case of HDR. Both TVs deliver similar picture quality which is well adjusted by default in Cinema and Expert presets and can be further tuned by a wide variety of different calibration options. HDR performance is similar on both, but for those who are interested in the ability to playback both HDR-10 and Dolby Vision, UJ75 is a better choice. Overall, considering the price, there are better alternatives on the market for similar or lower price (e.g. Samsung's MU6xxx series), which offers higher contrast picture and similar picture processing/low input lag for games.

Both TVs share a simple and elegant design with a combination of silver and black elements. While UJ75 uses so-called “crescent” stand and has silver bezel made of metal, UJ65 has a “2-pole” plastic stand with bezel and backside made of metal. The bezel on UJ65 has rounded edges and looks simpler, while UJ75 combines silver front bezel and black plastic outer frame to make the design just a bit more interesting. The bezel is 10 mm wide on UJ75 and 15 mm on UJ65.

Build quality itself is good for the price category, except for the stand on the UJ65 which leaves a lot to be desired. It does not hold the screen as firmly as one would expect and screen wobbles easily if you push it just a little. 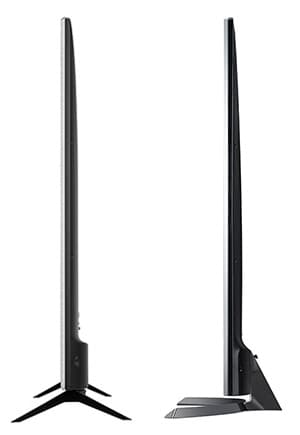 Both TVs have 4 HDMI inputs that support UHD/HDR, 2 USBs, Ethernet, Wi-Fi (802.11ac), RF and satellite inputs, Bluetooth, Toslink, CI and component A/V inputs. The only additional output on UJ75 is the 3.5 mm headphone jack through which you can connect headphones or, for example, PC speakers to improve sound quality.

Both have down-firing stereo speakers (20 W).

49UJ7507 arrives with more advanced “Magic remote control” (AN-MR650A) compared to the standard one supplied with 43UJ6517. Both remotes share same layouts as was the case in previous years, however, a closer look reveals small, yet noteworthy changes. Both remotes now offer a dedicated “Netflix” and “Amazon video” buttons, which will load the corresponding app even if the TV is on standby.

Another new thing is a multifunctional numerical keyboard. Since fewer and fewer users actually use these buttons except for watching live TV, LG made them capable of “quick access” functionality. What that means is that you can assign a particular input or app to any of 9 buttons and be able to launch it without opening home menu or navigating different menus. Button 0 opens Quick Access menu where you can easily manipulate with the position of certain app or input for each button.

Panasonic introduced similar “My App” button on its remotes this year as I saw on 65EZ1000E OLED TV, but only one button and on the poorly selected position on the remote (on its very bottom). LG’s approach is much better and more versatile.

Magic remote works like a charm with webOS. It has a very accurate pointer so you can without any effort select the option you want, change settings, etc. There is also a scroll wheel, a built-in microphone and Live Zoom option, making Magic remote still one of the finest on the market and a clear winner compared to the standard remote on UJ65 series.

Both TVs come with LG’s latest webOS in version 3.5. The look and feel of the platform did not change compared to 2016 webOS 3.0, it still is very easy to use and customize. The article on FlatPanelsHD mentions a few upgrades compared to the previous version, so here is the list below:

New features listed above are exclusive to webOS 3.5 and most probably will not become available to previous generations. Despite both UJ75 and UJ65 having exactly the same webOS 3.5 installed and same options available, more powerful hardware led to the smoother user experience with more animations on the former model.

Both TVs share very good support for playback of various multimedia files over USB or network. I was able to play H.264 and H.265 files, MKV containers over USB and Synology NAS, smoothly and without stuttering or slowdowns. Subtitles are displayed if they are inside the MKV container or as a separate file (which needs to have the same name as the video file).

Winner: a tie (both perform the same) 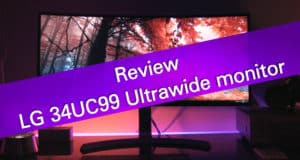 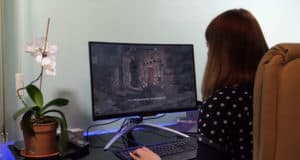 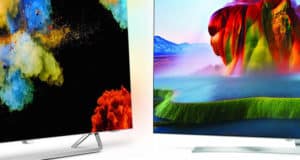 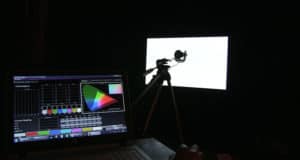